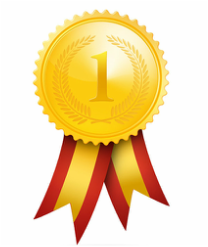 Shortly after school started, the district was notified that it had received (for the second time in three years), the Colorado Department of Education’s highest performance level - Accredited with Distinction award. To earn this honor a district must be in the top dozen performing school districts in the state on performance indicators which include academic achievement, academic growth, academic growth gaps and post secondary and workforce readiness. We are proud of this honor, but more importantly, proud of the hard work from our staff, students and families.

Swink Elementary School was awarded the John Irwin School of Excellence and Healthy Schools Champion for the third year in a row.

Five high school students attended the National FBLA competition. They qualified for this trip by placing in the top two or three at the state level competition.

Swink athletic teams continued the Lion tradition and competed in the regional and state level. The volleyball team was in the top six at the state bracket. Leah Roberson was awarded All – American honors in volleyball. Austin Coy was a state champion in wrestling. Both will be going on to compete at the college level.

Congratulations to the Senior Class who were awarded approximately a million dollars in post secondary support. A Daniel’s Scholarship went to Antonio Cabrera. Kane Scholarship awardees were Devin Camacho and Rebecca Smith. This is an impressive endeavor for 23 students!

Swink School District is known for exemplary K-12 student achievement. Our test scores on the Colorado state assessments are consistently among the highest in the state. Our small class size (average of 15 students), opportunities for advanced coarse work (through concurrent and OJC classes) and a culture free from discipline issues contribute to a school family that knows the value of an education.

Congratulations to the Third Grade students and their teachers. They posted a 100% proficient/advanced score on their TCAP Reading test this year!

Swink Elementary School was awarded the 2013-2014 National Title I Distinguished School. Two of our teachers traveled to California to accept this award on behalf of the school at the National Title I Conference.

Five high school students attended the National FBLA competition. To qualify for this honor they won the state level competition in their respective events.